Fay’s piece re Fire. Was this what really happened? Also uses another trigger to tell a story form a minor player’s point of view.

A WAYWARD SPARK?
‘But, Mr Farriner, sir, it weren’t me… it were you, sir. You said you’d check it. You said, go to bed Katie, I’ll see to the oven. So that’s what I did, sir.’
Thomas Farriner wiped his brow and spread ash and muck over his harrowed face. Flames were licking up the wall but at least his wife and children were safe. ‘Katie, did Nell get out like I telled ‘er?’
Kate the young scullery maid was watching the flames spread across the narrow laneway to the chophouse opposite.
‘No Mr Farriner, sir, she didn’t. She were afeared of the height and wun’t jump. I kep tellin’ ‘er, sir. She just stood at yon winder screamin’ and then she stopped. It were ‘orrible, sir. She just stopped.’
They heard a loud crash and fearful wailing as the roof of the chophouse suddenly collapsed and horrid, malicious, blood red flames went raging onwards. It had been a dry autumn. Strong easterlies with their own agenda and momentum only added to the dangerous mix. Several warehouses containing pitch, tar and cordage helped fuel the fire and soon the whole of Pudding Lane was alight.
Thomas Farriner couldn’t believe the devastation and speed of the conflagration that was playing out before his eyes. Had it been his fault? Was he truly to blame for this?
Sam Barker, publican of The Baker’s Arms said that the Lord Mayor, Sir Thomas Bludworth had been informed but had said the fire was insignificant and went back to bed. What folly was this because if firefighters had been mobilised then, at 2.00 am, the fire might have been contained. Creating back-breaks by pulling down buildings the fire’s path was the usual method, but now it was too late.
By 4.30 am, 300 houses had already gone and the waterside was thronged with people endeavouring to save themselves and at least some of their meagre belongings. It was chaos. The choking heat, the unmistakable stench of death and the din of terrified people screaming amid the infernal background noise of hungry, crackling, rushing flames, coalesced into something like hell.
‘I ‘eared that the Lord Mayor was asked to order fire-breaks and all he said was, but who’ll pay for the rebuildin? So a government man called Pepys went directly to the King at Whitehall who issued instructions to spare no ‘ouses but to pull down everything in the fire’s way.’
Sam Barker might have been a hopeless gossip, but he always knew what was going on.
Action was now finally being taken but the blaze just continued, up Fish Street Hill, along Canning Street, Gracechurch Street, Lombard Street, Cornhill and Fenchurch Street and as darkness fell, there seemed to be no way of stopping it.
Across the river people watched in bewilderment as St Paul’s Cathedral, illuminated from inside with flames against the darkened sky, while the Tower Of London stood nearby, unscathed. Suddenly, a collective cry of anguish and disbelief went through the crowd as the roof of St Paul’s cascaded down in a torrent of molten lead. St Paul’s Cathedral, with it’s perfect symmetry, the epitome of the stonemason’s art, was reduced to a hideous facsimile of the original. It soon became apparent that the reason The Tower remained untouched was entirely due to the razing of every house that stood nearby.
On King Charles’s orders the same action was taken to stop the blaze reaching the Inner Temple area and he and his brother James were now in charge or operations. They worked amongst the flames in bucket chains and even rewarded the men’s efforts, directly, from bags of guineas hanging at their belts.
By September 6th, 89 churches, including St Paul’s, had gone, 13.200 and almost half of the area inside the city walls was destroyed. 100.000 Londoners were homeless and camping on Moorfields, but Charles chose to ride among them to try and dispel rumours that were spreading, like flames, that the Dutch or the Jesuits had deliberately started the fire.
The king’s baker, Thomas Farriner of Pudding Lane was plagued with doubt as he surveyed the desolate expanse before him, marked only by odd heaps of blackened stone. Maybe I’m not wholly to blame, he reasoned. Maybe it was the Lord Mayor’s fault or…fate, and if no-one finds out…it might all just go away. But on September 10th, a broadsheet was published by an observer, the diarist John Evelyn, who lived 6 miles from the city in the country village of Kensington.
‘You would have thought for 5 days that it had been Doomsday from the fire, the cries and howling of the people. My gardens were covered with ashes of paper, linens and plasterwork blown there by the tempest and I cannot help but wonder if someone is currently wrestling with their conscience.’
‘Well it ain’t me, muvver, ‘onest it ain’t.’ Kate Warner sobbed as she tried to read the broadsheet aloud. ‘Mr Farriner telled me to go to bed and ee’d see to the oven. He kep’ sayin’ it were me to blame but it weren’t. An’ it weren’t Nell neiver. Nell weren’t just an ‘ousekeeper she were loverly. She allus made sure I ‘ad plenty of food…an’…I miss ‘er.’
Mrs Warner had listened intently and when her daughter finally stopped sobbing and went to sleep, she crept slowly away from Moorfields. Kensington couldn’t be too far away, could it? 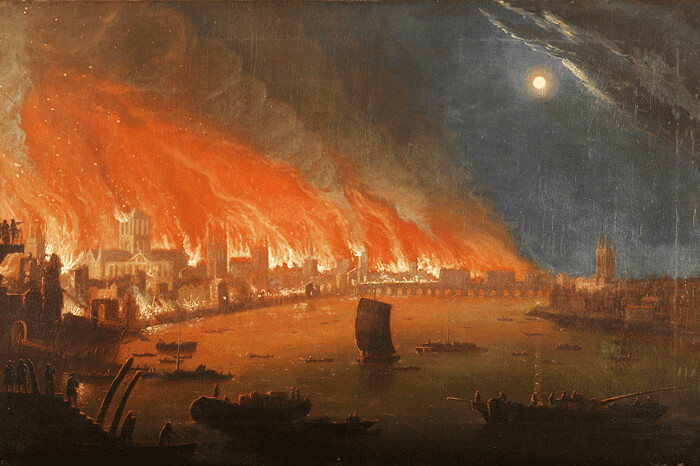 Barrie’s piece on the Fire trigger

LOOKING INTO THE FIRE by Barrie Purnell

When I look in the fire I see flickering traces

Of forgotten faces and faraway places

But who is it I see is it an enemy

Did Dresden settle the score for what went before?

Victory it will assist the air marshal insists

Do you think god acquits

When I look in the fire I see Hiroshima in flames

Did you feel any shame? Who was to blame?

Do they ask why? Do they cry?

She fought for Christ’s sake that was her mistake

Her battle was won in the town of Orleans

But she was undone by the bishop Cauchon

The flames going higher on his funeral pyre

When I look in the fire I see a million suns

Born when there were none now dying one by one

Making me think of infinity the Holy Trinity

Of earth’s fragility the laws of relativity

Will I be able to tell when I say my farewell

Or as a humanist will I just cease to exist

Or by angels be kissed?

Will I be missed?

David’s response to the trigger from the elements

‘A match is lit by striking it against the side of a matchbox. The reddish material coating the side of the box is made of red phosphorus, a stable form of the highly volatile white phosphorus, made infamous during the Vietnam war. It is mixed with abrasives such as tiny fragments of glass to create heat through friction.

When you strike a match the red phosphorus is converted to white phosphorus for a fraction of a second, just enough to cause a spark of heat by reacting with oxygen in the surrounding air.

This heat then ignites the first chemical on our journey – potassium chlorate. This is an oxidising agent, fuelling the spark into flame using oxygen stored in its molecular structure.

While this produces the distinctive flame when a match is struck, it will quickly burn out if it can’t ignite the next step in the reaction. Antimony trisulfide – the same stuff that gives gold-coloured fireworks their colour – is ignited by the potassium chlorate and continues to burn steadily. The antimony is responsible for keeping the match head lit long enough for the underlying wood to catch fire.

The distinctive smell of a safety match is also thanks to the antimony, which when oxidised, forms sulphur oxides. The match is now lit and ready to go to work. Paraffin wax coating the match ensures that the flame travels down the match in a controlled fashion.’

Katelyn watch in awe. Like the rest of her classmates gathered round Mr Ellis’s workbench, she barely understood a word he had said. But she was fascinated by the fire he had produced at the tip of the long stick when he had scraped it down the side of the big yellow box, and she was mesmerised by the colours that danced and flicker round the black head of the match he held up between the finger and thumb of his right hand. It was the first time she had seen a naked flame. The sight of it sent a flush of excitement coursing through her young body that left her almost gasping for breath. She had never seen anything so perfectly beautiful.

When the class was dismissed, and Mr. Ellis was cleaning the whiteboard, Katelyn moved round the workbench, opened the drawer, took out the big matchbox, closed the drawer, and walked slowly out of the room.