Pete’s response to the trigger ‘tap’.

A new doctor stretched out, behind his desk,
Holding a nameplate, in shining brass,
‘Tap, tap … tap, tap, tap’,
When in walked, hypochondriac, Jane Glass.

“I need medication for my arthritis,
Stomach ulcers and my heart,
And, what about my inflamed bowels?
So embarrassing, they make me fart.

“There’s cream I require, for cystitis,
My haemorrhoids are playing-up too,
And how long, I’ve suffered with migraine?
To be honest, I haven’t a clue.

“But worst of all, are my chest pains,
I’m having a heart attack.” she said.
After carefully reading her medical notes,
“You are a fraud, and just swinging the lead.

“I just don’t have the time, to waste on you.”
His feelings, he just couldn’t hide,
But later was given, the shocking news,
She collapsed, and died outside.

That first day in practice, played on his mind,
To the point, when he broke down and cried, F
inally he found, he could take it no more,
And was forced to, commit suicide.

Ironically, they buried him next to her,
Him, with his terrible burns.
Next day on his coffin; ‘Tap, tap … tap, tap, tap.’
“Hey doctor, have you got anything for worms?”

When thinking back, I often relate,

To an aging old couple, that passed by our gate,

Around Worksop town, they’d both come and go,

And went by the names, of ‘Old Ned and Flo’.

Ned, he was born of quite noble birth,

But is there a price on what that is worth?

For as he grew older, he had everything made,

But fell in love, with a pretty young maid.

His ma and pa were both quite aghast,

Yet try as they may, he just wouldn’t hear,

So when they were wed, he was out on his ear.

A home with refinement meant nothing at all,

To this king and queen, who’d answered the call,

A call from the wild, and the wide open spaces,

To shake off the shackles, and throw off the tracers.

No longer in future, would they need a home,

For no one was happier, than Flo with her Ned,

With devotion unmatched, from that day they were wed.

In turn each would push, a run-down old pram,

For the comforts of life, they gave not a damn,

Their worldly possessions, were on those four wheels,

And yet they were happy, though down at the heels.

Flo broke her leg, in a fall or such,

So Ned bless his heart, would push his old dutch,

Mile after mile, around country lanes,

The smile on her face, repaid all his pains.

He noted these things, as he toiled in his labours,

For these little moments, were relished and savoured.

As kids we would taunt, and Ned would give chase,

But always made sure, that we won the race.

No malice or grudge, he ever did bare,

For God knows he took, much more than his share,

Now that I’m older, and know I was cruel,

I’d like to say sorry, for playing the fool.

T’was a sad day for Flo, when Ned passed away,

She had no one close, and nowhere to stay,

After choosing the life, of an outdoor pursuit,

It seemed that she now, had to finally take root.

But where could she go, In clothes ragged that smell?

For this was the problem, they knew only too well,

They did her up nicely, and treated her well,

And she looked like a lady, whilst in their care,

But she never got over, Ned’s passing away,

And thought of him constantly, day after day.

Flo died soon after, they say that she pined,

But left us some wonderful memories behind,

If you’re up there Ned, with Flo looking down,

I most deeply regret, my acting the clown. 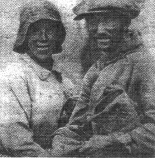 So when the time comes, and my life’s at an end,

I hope you’ll both meet me, and say. “Welcome my friend”.